I wrote the first draft of Unraveled about five years ago. And I sent it to almost ten people. It was terrible. My friends gave me honest feedback some said Unraveled was cringe-worthy.  I knew Unraveled needed some more fine tuning. The first draft of this project was simply a step towards the making of this book, and the beginning of an idea.

Never give up. Just keep fine-tuning.

There is a verse in the book of Ephesians, Chapter 4:

You were taught, with regard to your former way of life, to put off your old self, which is being corrupted by its deceitful desires; to be made new in the attitude of your minds; and to put on the new self, created to be like God in true righteousness and holiness.

One year as I led a study alongside a mentor of mine, I was blown away by John Stott’s teaching on these few verses. It occurred to me that in my life, putting off the old self and putting on the new self is a daily dance and a constant process. We never really arrive in the Christian life. I discovered, once I overcome one layer of sin and selfishness, there seems to always be another layer underneath.

As we grow and mature, we are unraveling old layers of the old self. 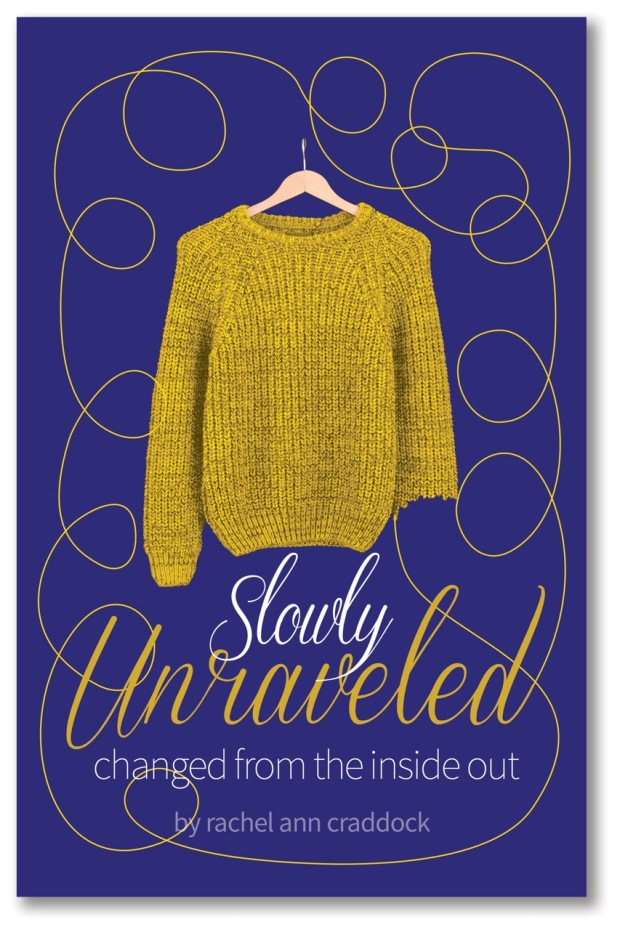 In the spring of 2017, I took a three day trip to the beach—without my husband and my four children—to hone in on the structure of Unraveled.

I spent time reading, praying, and thinking about where Unraveled could start as a book—and where I wanted it to go.

I read two books on that trip. Paul Tripp’s What Did You Expect: Redeeming the Realities of Marriage and All the Light We Cannot See by Anthony Doerr.

I read and listened to teaching and storytelling. But I also wrote. And I wrote, and I wrote . . . on an iPad with a keyboard attachment, on the beach in the sun: trying to see the screen through the glare and flipping back and forth between the Microsoft Word App and the ESV Study Bible App.

I spoke via email with Karen Hodge on that trip and I enjoyed spending time with my grandparents while I read, wrote, prayed, and slept.

At the beach, the idea to write Unraveled in sections came to me. The book is divided into six sections: Strength, Identity, Perfectionism, Marriage, Parenting, and Grief.

And at the beach, I started to think more deeply about the entire book of Ephesians and how the entire book  went alongside the sections of the book I was dreaming about.

From March 2017-May 2017 I studied Ephesians. I read James Montgomery Boice, John Stott, listened to Tim Keller, and struggled through Peter T. OBrien.

In May of 2017 I was invited to speak at New Vienna Church and I decided to try out my Unraveled stuff with everything I was learning from studying the book of Ephesians.

If I want to be honest about humble beginnings and starting from a place of smallness, here is my rough around the edges talk. The talk starts around 15 minutes and ends around 55 minutes.

In the summer of 2017 I had a real first draft for Unraveled. I sent nine copies out to different people, one copy to my husband, and one copy to a pastor friend.

I learned Unraveled was going somewhere. I learned about the Oxford comma, and I learned I have no idea what the difference is between a comma, a semi colon, an em dash, or parenthesis. I only applied to colleges that did not require an admissions essay—writing has never been my thing.

But teaching, encouraging, and storytelling are my things. So are humble beginnings. So I kept going and learned what I could as I went.

Most of my friends sent Unraveled back to me by August of 2017, and I went through all their notes by the end of that summer.

But then I sat on my draft for six months. I was so afraid to send Unraveled to a publisher and I had no idea where to start. Fear felt big for a time. So I waited.

In February 2018 I felt the twentieth anniversary of my mother’s death approaching quickly. I really wanted to publish something before 2018 was over—this was a personal goal I had set for myself.

In February, I sent a draft (at this point read by approximately twenty people) to Karen Hodge and Christina Fox. Karen is a dear friend and mentor of mine, and the Coordinator of Women’s Ministries in our denomination and a published author. Christina Fox is the editor of our denomination’s blog as well as a published author. Both of these women were so encouraging. I was directed to the book proposal page for CDM and a book: Get Published: 11 Must Know Publishing Secrets by Mary DeMuth.

I was subbing for a teacher who is now my second son’s second grade teacher. I was sitting at her desk during lunch, registering for our denomination’s national meeting, General Assembly, and texting with my friend Eileen about the details for the trip. All of a sudden I received an email that CDM received my book proposal and I would hear back in six to eight weeks.

Shock is an understatement here. When I talked to my husband about this I said, “CDM will never publish my book.”

Then, I prayed and I waited a little bit more. And I continued to revise.

This year  I decided to go on a trip to the beach with my family for the twentieth anniversary of my mother’s passing. April 7th, 1998 is the day she passed away and each year April 7th is a dark day for me. To break the cycle of sadness, I wanted to go to the beach, a place my mom loved, and I place I have sweet memories of mom mom from years past.

On my way to the beach, on April 7 2018, the twentieth anniversary of my mother’s passing—l was in the car at a restroom break somewhere in Georgia—I got an email from CDM saying that they would love to partner with me and publish the story, Unraveled.

The detail of this email coming on such an important day is a detail I will never forget to highlight. God cares for us in the small things and in a small way April 7th has been redeemed for me. On April 7, 1998 my mother passed away and on April 7, 2018 I received an email communicating that Unraveled would be published.

From Unraveled to Slowly Unraveled. I have written this on my blog before and I will write it again: I still order chicken nuggets, fries, and a coke with no ice at McDonald’s because I am the kind of person who does the same thing all of the time. Change is not light and easy for me. So a title change was rough. I had so many layers to unravel when it came to the expectations I had for a one word title.

But, if you search Unraveled in Books on Amazon, turns out you will find a lot of books with title covers picturing men wrapped up in ropes. This is not the image we were hoping to capture with Unraveled.

I think our team suggested up to twenty alternative titles. But Slowly Unraveled: Changed From the Inside Out came as my sweet and smart editor was reading my final chapter.

And it is a true, noble, worthy, and fitting title. It is humble. And it is good. Because any kind of true change happens slowly. Any kind of process worth going through takes time, it takes a whole lot of not giving up, and it takes a village of people to help you fine tune. This book has been a Slowly Unraveling process and I am so proud this is the title of the book.

In the process, about thirty more people have read Slowly Unraveled. So now this community project is up to about fifty people. Some (Marlys and I) have read it more than hundred times . . . we are both Slowly and thoroughly Unraveled, but so pleased to share this book with you.

Find it in the PCA Bookstore on January 10th.

I’d love to come to your town for a book signing event! Message me soon.

Thank you for being alongside me on this long, Slowly Unraveled journey. Each of you have encouraged me to never give up and keep fine-tuning. I am thankful for you!